Advanced Surface Ablation (ASA) is a highly advanced form of photo-refractive keratectomy (PRK, which is a reshaping of the cornea with laser light), using highly sophisticated excimer lasers capable of eye tracking and customized treatment to reshape the front surface of the cornea and correct vision.

ASA patients are treated with exactly the same advanced lasers as our LASIK patients, and the accuracy and long-term results of ASA and LASIK are virtually identical. We recommend this surface treatment for certain patients with very thin corneas, those who have had previous LASIK surgery or individuals involved in high contact activities.

The pictures below provide an overview of how this safe and effective procedure is performed here at Clearview. 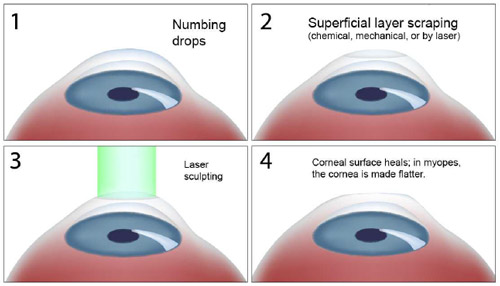 The ASA procedure we perform today is a very far cry from excimer laser surgery we performed ten years ago, commonly referred to as first generation PRK. While those early cases provided excellent results, there was definitely more discomfort with surgery from that era.

Today's ASA patients do experience some discomfort, generally over a 48 hour period, however with vastly improved lasers, techniques, advanced overnight contact lenses, medications and eye drops most patients heal quickly and are able to return to normal activities in 3-5 days.

A temporary soft contact lens is placed on the eye for a few days during the healing process... One very minor disadvantage of ASA is that vision is often slightly blurry for a few days after the surgery. This blurring is only temporary, ASA patients are treated with exactly the same advanced lasers as our LASIK patients, and the accuracy and long-term results of ASA and LASIK are virtually identical.

Patients who previously could not have LASIK surgery can have refractive surgery and have freedom from their glasses or contacts. Many patients who would be candidates for either LASIK or ASA will elect to have ASA simply because it offers comparable results with the advantages of a completely "flap"-free surgery.

Where Should Your Lasik Research Begin?

Clearview proudly works with the Make-A-Wish foundation of America.

Change Your Vision,
Change your Life!

LASIK is a medical procedure with risks involved and isn’t right for everyone. Individual results may vary. Talk to your eye doctor and consider both the risks and benefits before having the procedure. Additional information can be found at our website or at fda.gov. the material contained on this site is for informational purposes only and is not intended to be a substitute for professional medical advice, diagnosis, or treatment. Always seek the advice of your physician or other qualified health care provider.